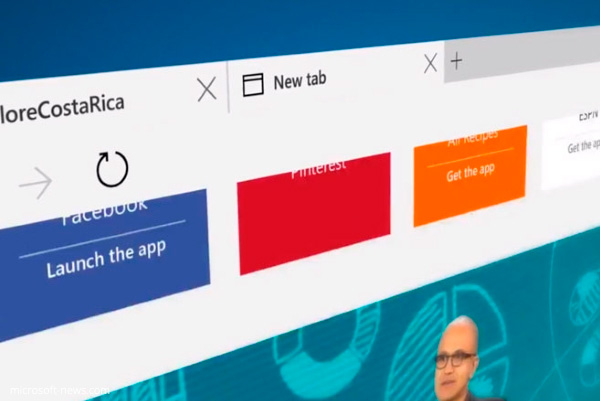 We are definitely exaggerating with our egde-this-and-that metaphors, aren’t we? Yet, we just cannot help ourselves. Microsoft’s new Internet Explorer called the Spartan Project, and now officially the Edge is such an easy target for word games. However, grandpa Microsoft is not in the game mood.

Why? It wants to prove so many things to all of us with the new Windows 10. The MS Edge is one of them. We all know what is going to be the very first target of the merciless criticism in this field, don’t we? What about the security features of the new MS Edge? How strong it really is?

Well, grandpa Microsoft offers us a bug bounty challenge. If you want to earn $11,000, then all you have to do is to find a security flaw in the Edge. Do we have to warn you that it is not going to be an easy task? Microsoft has done its really best for the Edge to shine like a true cyber-star.

This way or another, sooner or later, some busy little bee will take this sweet honey prize. The questions is, though, how many times will grandpa Microsoft have to pay for this bug bounty? Either way, it is better to pay now than later, in the aftermath of a serious cyber attack. The clock is ticking. Your money is waiting.

It seems that the Microsoft’s troubles with the updates and lack of technical support for the older versions will eventually turn into an endless saga. For what is worth, Microsoft has been caught in the crossfire. Unfortunately, there is not much it can really do about it in the first place.

On the one hand, we have loyal, but extremely stubborn Windows users, who are not eager to leave their XP, Vista or Windows 7 versions behind. On the other side, there is a crumbling pressure of the ever present cyber threat. The unprotected Windows has become the hackers’ Eldorado.

Therefore, Microsoft has decided to block all old web plugins with the latest update in order to increase the level of cyber security. In addition, one very serious rumor has it that Microsoft is so desperate that it is willing to give away Windows 9 for free to XP users just to make them to leave it.

It comes without saying that this is a tricky situation for Microsoft. Which one hurts less? To lose Windows users or its flawless reputation as a cyber-threats-proof place. Oh, this is tough one, undoubtedly. They will need all rocket scientists, they can find to solve this puzzle successfully.

The things have changed this summer. So far, Java has been the most favorite destination for hackers during the warmest period of the year. However, according to the findings of the Bromium Labs  it seems that the hackers have found the next big summer hit – the good old Internet Explorer.

What is so special about the Internet Explorer? Well, you should probably know by now that ensuring the technical support for the outdated versions is definitely the Achilles’ heel for Microsoft. Windows XP cannot count on the support including Internet Explorer 8. No support + no updates = no protection.

The trouble with Microsoft users is that they are unadorably loyal and surprisingly stubborn. Every now and then, Microsoft urges them to move to the latest versions available. Nevertheless, they keep using older versions of both Windows and IE while demanding the continuous support regardless of the circumstances.

And, here it goes. While the two sides are arguing, in our case Microsoft and users, the third party takes an advantage of the situation. The hackers just could not wish for more. Stubborn and reckless users, who are swimming in the unprotected waters. Hunting season is on. Update or suffer, there is no third option.